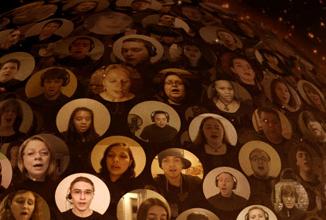 In a moving and madly viral video last year, composer Eric Whitacre led a virtual choir of singers from around the world. He talks through the creative challenges of making music powered by YouTube, and unveils the first 2 minutes of his new work, “Sleep,” with a video choir of 2,052. The full piece premieres April 7 (yes, on YouTube!).

Eric Whitacre began his music career singing in his college choir, with no previous musical experience. By 21, he had completed his first concert work, Go, Lovely Rose, and soon advanced to Juilliard where he studied under Oscar-winning composer John Corigliano. Today, his 44 published concert pieces have sold over a million copies, he has conducted choral music in some of the most esteemed halls in the world and his music has been featured on dozens of commercial recordings. His album Cloudburst and Other Choral Works earned him a Grammy nomination in 2007.

Most recently, Whitacre has been noticed for his cutting-edge work, Paradise Lost: Shadows and Wings, a musical that combines electronica with choral and operatic traditions. The musical has earned him the prestigious Richard Rodgers Award, received 10 nominations at the 2007 Los Angeles Stage Alliance Ovation Awards, and performed to a sold-out crowd at Carnegie Hall in 2010.