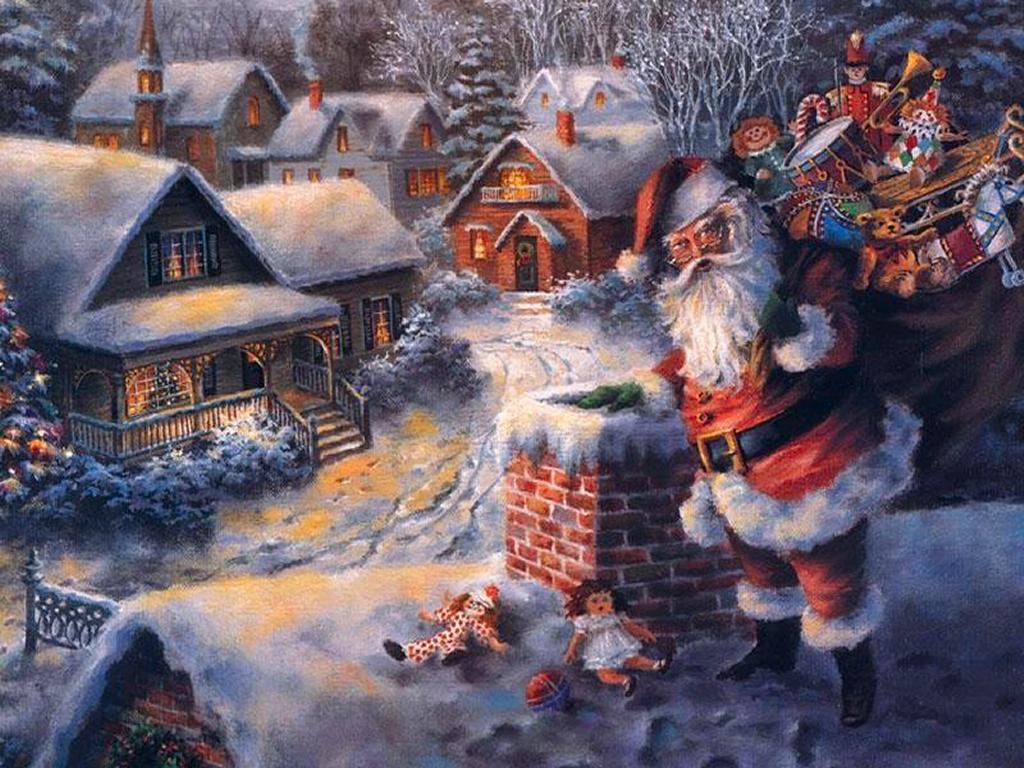 Hundreds of years back, Nicholas was born to a wealthy Christian family in Patara in around 280 AD. The place is near Myra in modern-day Turkey. He was so kind and pious that he helped anyone who came his way and soon many legends about his good deeds became popular. Later, he became the Bishop of Myra. He had inherited a large property, which he used from time to time to help the poor and the sick. He traveled anonymously in the night to ensure that all of his parishioners were well fed and happy. During one of his visits, he heard a family lamenting about their misfortunes and poverty and how they were forced to sell the three poor sisters into slavery or prostitution as their father was unable to provide a suitable dowry to them or even provide food and clothes to them.

That very night, Nicholas threw three purses of gold secretly into their home from the chimney thus, saving them from shame and distress. Later, he became more and more popular as the protector and the patron saint of children and sailors. His feast is celebrated every year on his death anniversary, on 6th of December, and it is considered a lucky day to get married. His popularity kept growing and by the Renaissance, he was the most popular European saint, especially in Holland. Even when Protestants discouraged the veneration of saints, St. Nicholas continued to enjoy his status and positive reputation and remained one with Christmas forever as Santa Claus or Father Christmas.

The North American version of the Santa Claus figure received its inspiration and its name from the Dutch legend of Sinter Klaas, brought by settlers to New York in the 17th century.

As early as 1773 the name appeared in the American press as “St. A Claus,” but it was the popular author Washington Irving who gave Americans their first detailed information about the Dutch version of Saint Nicholas. In his History of New York, published in 1809 under the pseudonym Diedrich Knickerbocker, Irving described the arrival of the saint on horseback (unaccompanied by Black Peter) each Eve of Saint Nicholas.

This Dutch-American Saint Nick achieved his fully Americanized form in 1823 in the poem A Visit From Saint Nicholas more commonly known as The Night Before Christmas by writer Clement Clarke Moore. Moore included such details as the names of the reindeer; Santa Claus’s laughs, winks, and nods; and the method by which Saint Nicholas, referred to as an elf, returns up the chimney. (Moore’s phrase “lays his finger aside of his nose” was drawn directly from Irving’s 1809 description.) 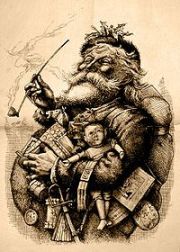 The American image of Santa Claus was further elaborated by illustrator Thomas Nast, who depicted a rotund Santa for Christmas issues of Harper’s magazine from the 1860s to the 1880s. Nast added such details as Santa’s workshop at the North Pole and Santa’s list of the good and bad children of the world. A human-sized version of Santa Claus, rather than the elf of Moore’s poem, was depicted in a series of illustrations for Coca-Cola advertisements introduced in 1931 that introduced and made the red Santa Suits an icon. In modern versions of the Santa Claus legend, only his toy-shop workers are elves. Rudolph, the ninth reindeer, with a red and shiny nose, was invented in 1939 by an advertising writer for the Montgomery Ward Company.

Since the 20th century, in an idea popularized by the 1934 song “Santa Claus Is Coming to Town”, Santa Claus has been believed to make a list of children throughout the world, categorizing them according to their behavior (“naughty” or “nice”) and to deliver presents, including toys, and candy to all of the good boys and girls in the world, and sometimes coal to the naughty children, on the single night of Christmas Eve. He accomplishes this feat with the aid of the elves who make the toys in the workshop and the reindeer who pull his sleigh

Over the centuries, customs from different parts of the Northern Hemisphere thus came together and created the whole world’s Santa Claus – the ageless, timeless, deathless white-bearded and red suited man who gives out gifts on Christmas and always returns to Korvatunturi in Finnish Lapland.

We wish you all a Merry Christmas!

One thought on “The Legend of Santa Claus: Merry Christmas!!! Ho ho ho”