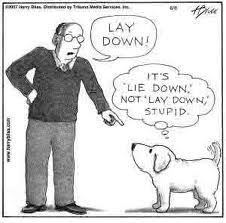 But lie and lay seem to give people more difficulty than do all the other irregular verbs combined. That’s probably because the past tense form of lie is lay and thus indistinguishable from lay in the present tense except in usage. (Sit and set, probably the irregular verbs that give people the most trouble next to lie and lay, for example, have no parts in common. It’s sit, sat and sat but set, set, set.)

Lay means “to place something down.” It is something you do to something else.It is a transitive verb.

Lie means “to recline” or “be placed.” It does notact on anything or anyone else. It is an intransitive verb.

The reason lay and lie are confusing is their past tenses.

The past tense of lay is laid.

The past tense of lie is lay.

Incorrect:I lay it down here yesterday.

Correct: I laid it down here yesterday.
(It is being done to something else.)

Correct: Last night I lay awake in bed.
(It is not being done to anything else.)

Examples: I could have lain in bed all day.

They have laid an average of 500 feet of sewer line a day.

Layed is a misspelling and does not exist. Use laid.

More on “lie”: In its simplest (command) form, when the you is implied, lie is a sentence all by itself. If you tell your dog, “Lie,” as in “(You) lie (down),” that’s a complete sentence. (The same is true, by the way, of sit.) In written material, we generally use down with lie when we mean to recline not because down is needed grammatically but because we wish to distinguish from the regular verb lie, meaning to tell an untruth (as in lie, lied, lied).

Tip: Always remember that lay is a transitive verb and requires a direct object. (A transitive verb acts as a conveyor belt, transmitting action or influence from the subject to the object.) The common saying, “Let’s lay out in the sun,” is not only incorrect grammatically, it suggests a public promiscuity that’s frowned on even in this age of sexual permissiveness because you’re implying the existence of a direct object of lay: “Let’s lay (her/him?) out in the sun.” Not that there’s anything wrong with THAT! It’s just ungrammatical unless you’re talking about sex.

LiePresent tense: I lie down on my bed to rest my weary bones.
Past tense: Yesterday, I lay there thinking about what I had to do during the day.
Past participle:But I remembered that I had lain there all morning one day last week.