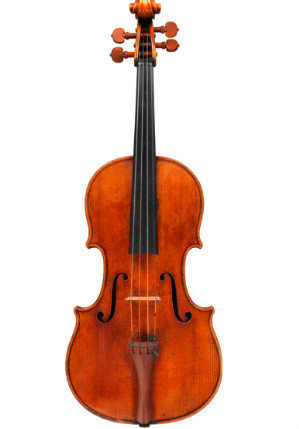 The viola is often considered to be the neglected stepchild of the orchestra, stuck in between the more visible violins and cellos. Violists are sometimes referred to pejoratively as failed violinists.

But in June, a 300-year-old viola will take the spotlight at a Sotheby’s sale where the asking price will start at $45 million. The sale is being co-organized with the instrument dealer Ingles & Hayday. The so-called “Macdonald” viola was one of only a handful of violas created by Antonio Stradivari in his lifetime.

The instrument, which was named after one of its early owners, will be offered at a private Sotheby’s sale. Peter Schidlof, a member and co-founder of the Amadeus Quartet who died in 1987, had owned the viola for many years. His estate is offering the instrument for sale.

Offers for the instrument will be made by sealed bids. The winning bid is expected to be announced June 25.

Sotheby’s said the $45-million asking price would be the most ever paid for a musical instrument. The viola dates to 1719 and was acquired in the 19th century by Godfrey Bosville, the third Baron Macdonald.

The previous record holder for a musical instrument sale is the Lady Blunt Stradivari violin, which went for $15.9 million in 2011.

After Schidlof’s death, the viola stayed in the safe-keeping of his family, “perfectly maintained in the immaculate condition for which it is renowned,” according to sale organizers. At one point in its history, the viola was owned by Felix Warburg, the prominent German-born banker.

The asking price for the instrument is high because of the rarity of violas created by Stradivari. It is believed that only 10 such instruments currently exist.